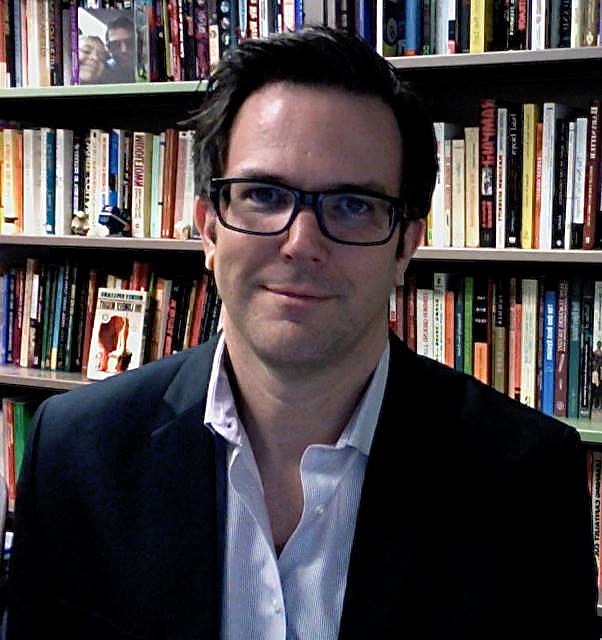 Read the latest issue of the M.A. Program Newsletter

of the M.A. Program Newsletter. Read the 2014 issue here

to learn more about the American Studies department culture.

Read my interview with The Daily Titan

Ph.D., American Studies, The University of Texas at Austin

AMST 350   Seminar in Theory and Method of American Studies

AMST 401T  Adolescent America: A Cultural History and Contemporary Study of the Teenager in America

Monsters in the Classroom: Essays on Teaching What Scares Us, edited by Adam Golub and Heather Richardson Hayton, McFarland, 2017.

"Monsters in the Classroom: Teaching Can Be a Scream

"Locating Monsters: Space, Place, and Monstrous Geographies," in Monsters in the Classroom: Essays on Teaching What Scares Us, ed. Golub and Hayton.

"Introduction: Monstrous Pedagogies," co-authored with Heather Richardson Hayton, in Monsters in the Classroom: Essays on Teaching What Scares Us ed. Golub and Hayton.

“"Engaging Fan Cultures: What Students Learn When They Study Fans"

"Stomping the Undead: A Blues Theory of Zombie Culture

Reprinted in The Journal of Transnational American Studies

“'They Turned a School Into a Jungle!': How The Blackboard Jungle Redefined the Education Crisis in Postwar America,” Film and History: An Interdisciplinary Journal of Film and Television Studies 39:1 (Spring 2009): 21-30.

"Reading the Monster and Its Moment

"To Understand Us, Look at Monsters

"Teaching Childhood Through Myth and Counter-Memory," Guest post for SHCYHOME.ORG, website of the Society for the History of Children and Youth, September 9, 2013.

“Teaching American Studies as a Habit of Mind

“American Adolescent: Holden Caulfield and the Culture of Not Growing Up

“Lessons From the Blackboard Jungle

From 2009 to 2013, I contributed essays to the American Studies blog "...and everyday life

From 2010-2011, I contributed essays on literature and culture to the Forbes.com "Booked: Reading Unbound

Leo Braudy, Haunted: On Ghosts, Witches, Vampires, Zombies, and Other Monsters of the Natural and Supernatural World

Scott M. Gelber, The University and the People: Envisioning American Higher Education in an Era of Populist Protest

Neil Miller, Banned in Boston: The Watch and Ward Society’s Crusade Against Books, Burlesque, and the Social Evil, in  Journal of American History 2011 (98): 544-545.

“The OTHER Other Fifties

Selection, Best of 2017, The Bookends Review, for "The Flute Case"

“Zombies Are Us: The Undead and our Imagined Community,” Humanities and Social Sciences Lecture Series, California State University, Fullerton, October 2018

"America's Shadow Self: The Cultural Work of the Doppelganger in Contemporary Literature and Film," Northeast Modern Language Association, Boston, April 2020

“The Blues as Matrix: Using the Blues to Teach Writing in the Computer Classroom,” Computers and Writing, Fort Worth, TX, May 2000

Matt Glassman, "The Ball Don't Lie: Cultural Tension and the Commodification of Hip-Hop Authenticity in the 1990s NBA," completed Spring 2010

I prepare students in the following areas: Institutions and Ideals; Consumption and Leisure; The National and the Global. Alternative Fields: Literature and Culture; Creativity and Expressive Forms; Monsters and Horror

Grad Advising Hours (for all M.A. students and prospective students): Tuesdays, 3:30-5:30, and by appointment

Welcome to my faculty web page. I am professor and graduate advisor for the M.A. program in American Studies at Cal State Fullerton. I am a U.S. cultural historian whose research and teaching interests include popular culture, literature and culture, monsters and horror, and the history of childhood and education. I also write fiction and am interested in creative work in American Studies. A little about me: I was born in Philadelphia, grew up in New Jersey, went to college in New York, taught high school English and History in Massachusetts and New Hampshire, wrote ESL textbooks in Boston, went to graduate school in Texas, taught American Studies at UC Davis, taught Education Studies at Guilford College in North Carolina, and landed at Cal State in 2007.